today i bring you a band that i havent talked about before, FT Island. they have been in the kpop industry for about.. 3 years now, and yet they're still slightly underrated. because FT Island is an actual boy band group & the kpop industry is more for boy groups who dance, FT Island isnt noticed as much ... although FTI probably has some of the most talent out there. and their lead singer Hongki has one of the best voices in the kpop industry - he sings soooo perfectly live too!! ♥ anyway, let me end my ranting here & show you the mani~

this is inspired from FT Island's I Hope - which they promoted last year. yes i know, i have such bad screen caps T____T and those silver lines are supposed to be the outlines of their guitars. omg, my FT Island writing is so sloppy! my left hand was extraaa shaky :(


here's my favorite FT Island song - from 2 years ago:

hi all! i hope you had a great holiday weekend!

i have -once again- another kpop inspired mani!

we all know by now that my favorite kpop group is Beast right!? haha well, here's a simple mani i did last night. Bad Girl was their debut song & its such a catchy song. since i only have 5 fingers on one hand & there are 6 members in Beast, you'll notice that i included all 6 members in the picture above. haha

ok, now i have a question: what is the max amount of polishes one should send out in a package? im sending my friends -who live in Malaysia- a package of polishes...and altogether, i have about 30 polishes for them. but i dont want to send all 30 out at once cause that just sounds like too much!...right? so i was thinking i'll send half first..and then i'll send out the other half another time.... ? what do you think?

i was smacked by inspiration last night when i bought my wrapping paper. so here is a new mani;

for the past month, i've been really slacking on reading & commenting blogs..so sorry! ='( but thanks for still checking in on my blog <3

i felt soooo uninspired & non-creative all week last week, thats why there was an absence in posts. still lacking creativity but i did come up with something holiday-ish last night;

my Rudolph is a little bit chubby...with his rhinestone, red nose :P and my Santa..omg, doesnt he look kinda creepy? haha 2 coats of Essie's Red Nouveau.

this will probably be my only post for the week...unless i get some random attack of creativity. haha

i used China Glaze's Shower Together, Atlantis, & Fairy Dust. i also added a few random big glitters. i did free-hand those snowflakes, which was a pain cause it took a super steady hand & im impatient. hehe.

can you believe Christmas is already next Saturday?!?!?! i have not even bought one single present yet!!! o____O im super behind this year. i might go shopping this weekend though~ haha

happy Monday! i hope you had a great weekend.

on Saturday night though, i did quickly find inspiration & so here i have another kpop-ish mani to share~ this one was inspired by Beast's first concert theme - which was Beast Airline.

the concert was on Sunday night & was only in Seoul, South Korea so -clearly & sadly- i couldnt make it T_____T

the green polish is 2 coats of OPI's Jade Is The New Black. p.s., dont laugh at my fugly design on my ring finger. haha =/


hmm, i have an exam on Wednesday so i gotta start studying. to everyone else who has finals this week, good luck!! :)

the wonderful Jessica over at Born Pretty Store has kindly offered to sponsor my next giveaway! 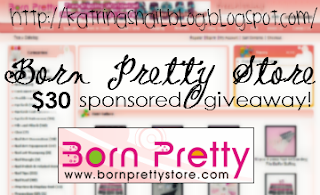 one winner will receive $30 to shop at Born Pretty Store and buy anything!

this giveaway will end
Friday, January 7, 2011~
the winner will be announced on shortly after & the winner must respond within 48 hours after receiving my email.

please leave the following information in the form below:

good lucky everyone!
<3KATRINA
Posted by Katrina at 10:19 PM 8 comments:

an anonymous person on formspring + someone on tumblr asked me to do a mani inspired by Big Bang & 2NE1's Lollipop. although im not a big fan of Big Bang, i do enjoy their music. 2NE1 on the other hand, i do really like. so spunky & different, they are. :) so onto the mani~

im so upset that the design on my pinky & thumb on my right hand turned out sooo badly. it really bothers me T__T and, i couldnt find any nice, HD music videos so the screen caps are super bad quality :'( its also killing me inside that the order of the girls in the picture isnt the same order as they are on my mani; but hey, thats just my tad bit of OCD kicking in. haha

i would also like to mention that the two lollipops are from my awesome package from Born Pretty Store. and the black bow on my pointer finger on my left hand is from a mold that i also got from BPS.

on, onto the mv. enjoy the music video~

anyone else on tumblr & is beyond annoyed that tumblr has been down for FOREVER now? -__- oh well.

hope your week starts out great!,
<3KATRINA
Posted by Katrina at 3:52 PM 29 comments:

the dark pink is 3 coats of F21's Love & Beauty Salmon. the light pink is 4 coats of Ulta's Sweet Tart. yes, sadly i had to use 4 coats. the polish is SO pretty but its kinda a streaky mess. the white polish i used is 4 coats of Revlon's Powder Puff. ugh, i hate having to use 4 or more coats of polish!!! T_____T but i loooove Powder Puff! theres a beautiful, slight blue flash in the polish! too bad it had a whole mess of bubbles when i woke up the next morning =/

the bunnies on my thumb & pointer finger are part of a recent package i got from Born Pretty Store.

Kevin of Inque Nails kindly sent me a sample of customized nail stickers and im here to share with you.

over at Inque Nails, you can literally customize your very own nails however you want to! any design, any pattern, any color, any way!! when i realized that ANY design will work, i thought of something crazy! i ended up putting faces for as my design! being the kpop freak that i am, i put my favorite person on my nails ;) wanna see how awesome they turned out!? ...

awesome right!? :) [irl, his face doesnt look so stretched out.] i ended up putting on fake nails & then applying the stickers on top because i have little nubbins right now :P

once you peel them off, they backs are sticky & you just apply them to your nails. the stickers itself are thick and strong so that was a bonus. the sizes were a the only problem...but you can just apply which ever part of the nail sticker you like onto your nail and then cut & adjust the size...thats what i did. - - this was a problem that was done by me; see how i put his faces at the top of the nails [on the sticker sheet]? it wouldve been better if i put his face closer to the bottom cause my nails arent really that long :P besides for that, these babies are so awesome!

big thanks to Kevin for being so kind and sending me a sample!

if you would like to customize your very own nails, check out Inque Nails & get started! they are SO worth it! :)

have a great one!,
<3KATRINA